New York's battle against the omicron COVID-19 variant continues to head in the right direction following the dramatic surge in the midst of the holiday season, with numbers seemingly leveling off of late and officials seeing a possible light at the end of the tunnel.

Gov. Kathy Hochul released the latest numbers on Monday, which showed hospitalizations holding steady on Sunday, staying under under 12,000 for the second consecutive day, the first time that has happened in more than a week. The number of ICU patients went down, and there were 1,000 more discharges than on Saturday, state numbers showed.

As for cases overall, there were just over 204,000 tests conducted statewide, with a positivity rate of 13.12 percent, according to the state — slightly up from the day before (12.9 percent), but still lower than any other day since Christmas. 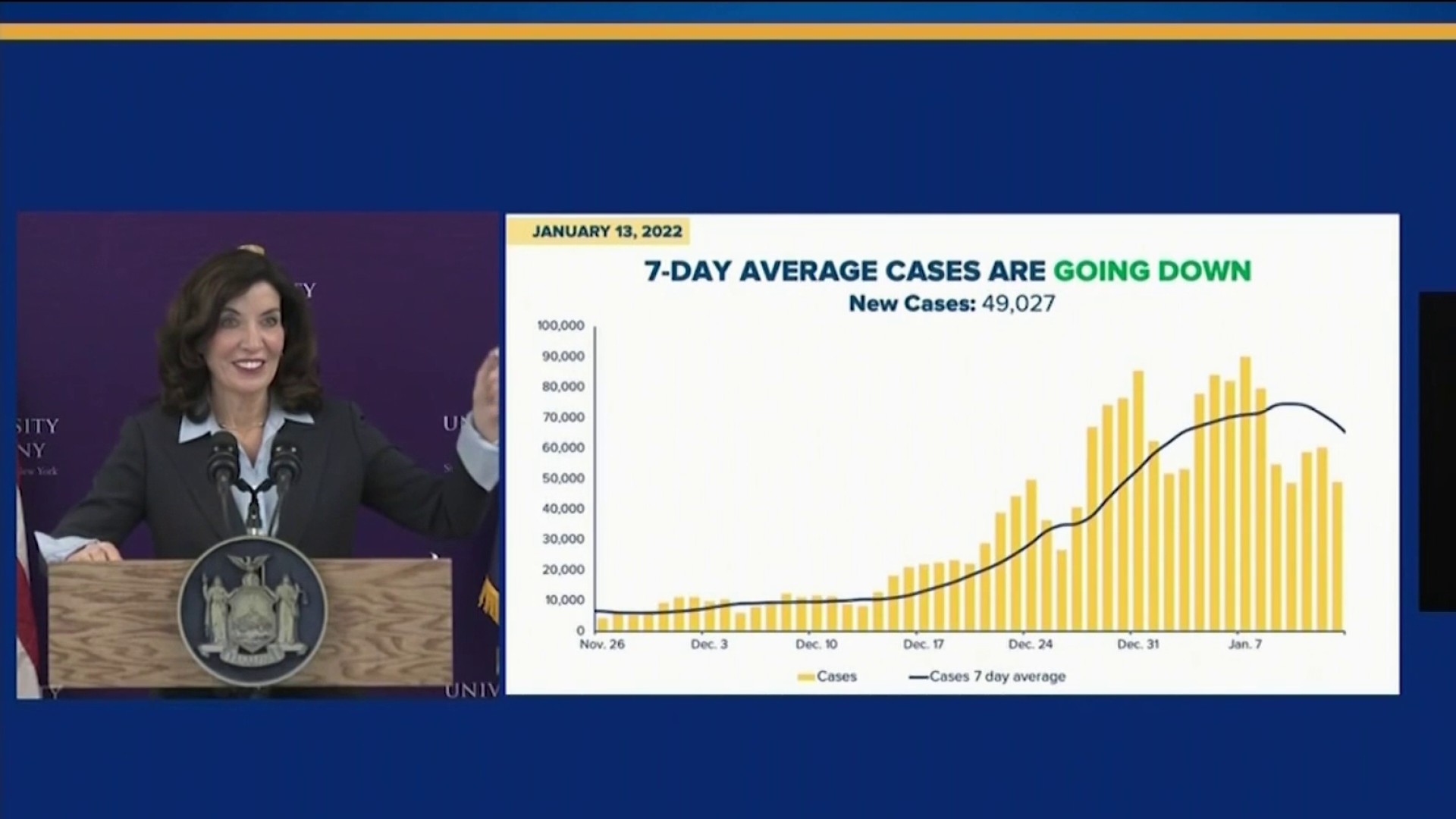 Omicron Symptoms: These Are The Most (And Least) Common Symptoms

The seven-day average of daily new cases has been declining since hitting a record high of 85,000 per day on Jan. 9, according to Hopkins data. Cases doubled during a number of seven-day periods in late December and early January, but are down sharply from last week to an average of 51,500. In New York City, average daily cases have fallen by 31 percent over the past week, state health department data shows.

“The COVID forecast is improving … the COVID clouds are parting," Hochul said Sunday. “Overall, the prognosis, the forecast, for COVID is much brighter than it had been before."

The city is doing particularly well after dealing with the brunt of the surge. The seven-day average of positive results is down to 14.28 percent for NYC, the second-lowest in the entire state. The only area that tops it the Southern Tier, and just barely, at 14.24 percent. Everywhere else in New York is above 15 percent, with central and western New York currently faring the worst.

Rochelle Walensky, Director of the Centers for Disease Control and Prevention, explains when people should get tested for COVID-19.

New York is still reporting a high level of daily infections, ranking 15th out of all states, according to a CNBC analysis of population-adjusted case counts, down from the second-most just a few days ago. New Jersey also recently fell out of the top five, now ranking 20th, as the state has seen a 32 percent drop in average daily cases over the past week.

Deaths, the ultimate lagging COVID indicator, are still high, with another 152 reported on Monday.

While COVID numbers appear to be leveling off in New York, it is not the case across the country. Cases nationwide continue to spread at rapid pace: The U.S. has reported an average of nearly 800,000 cases per day over the past week, according to data compiled by Johns Hopkins University. That's more than three times the level seen during last winter's previous record.

Since Jan. 2, it has taken only one or two days to top the next million case mark. On Monday, the U.S. eclipsed 66 million total cases.