NYC announced more than 12,900 new positive COVID tests Friday, a 17% jump from numbers he described as "staggering" two days ago; new hospitalizations are up 31% in the last day across the city

Five distribution points started doling out free Binax at-home tests at 9 a.m. Each site only has about 2,000 kits to give away so supplies are expected to deplete rapidly. It'll likely only make a dent in what has been a massive increase in test demand that has left labs struggling to keep up and forced some providers to close.

Drugstores posted sold-out-of-test signs. Lines wrapped around blocks at some testing sites, with some saying results could take three to four days. For next-day results, one site listed a price of $150. For results in two hours, the price was $389.

Many walk-in sites will close early Friday for Christmas Eve and won't be open at all Christmas Day so an intense rush is expected early.

The locations of Friday's distribution sites are:

NYC ER Doctor Compares What Hospitals Look Like During COVID Surge Vs. Early 2020 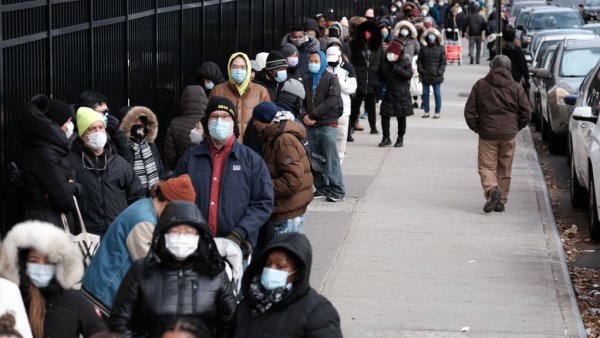 Op-Ed: NYC's Top Doctor on How to Protect Yourself, Loved Ones Amid Omicron Surge

New York City's rolling COVID case average is up nearly 139% over the averages for the prior four weeks, the latest data shows. Mayor Bill de Blasio announced more than 12,900 new cases Friday, a 12% jump over the day before and a 17% increase over Wednesday numbers that the Democrat had described as "staggering."

De Blasio also added another 259 hospitalizations to the count, up 31% from the day before. Those rates, while up recently, have been manageable and less jarring than the skyrocketing case numbers. Overall, rolling hospitalizations are up 20% in the latest seven-day period compared with the average for the prior four weeks.

Authorities have said the vast majority of those more severe cases are people who aren't vaccinated and urge all New Yorkers to get dosed and boosted. The case surge is expected to be short-lived, perhaps a matter of weeks, de Blasio and his top health experts have said. And while omicron-linked cases are believed to be milder than those linked to earlier COVID strains, particularly delta, the sheer spread rates have astonished officials and rattled the pandemic-weary city to its core.

Roughly 1.7% of all Manhattan residents have been infected in just the last week, according to the latest data posted by the city Thursday. That's just an average - in some neighborhoods, the numbers are astronomically higher. In Greenwich Village and SoHo, it's 2,927 cases per 100,000; in Chelsea, 2,513 per 100,000.

At those rates, Greenwich Village would dwarf just about any current outbreak spot, anywhere. According to the New York Times' data, Washington D.C., where omicron is raging like wildfire, is "only" up to 158 cases per 100,000.

The spikes forced de Blasio to modify his plans for Times Square on New Year's Eve, slashing the crowd by nearly four-fold to about a 15,000-person limit. Everyone has to be fully vaccinated to attend and everyone has to wear masks. There are some exceptions, but they are quite limited. Learn more about the plans here.

A number of Broadway blockbusters, including "Hamilton" and "The Lion King" have canceled performances at least through Christmas because of breakthrough COVID infections within the companies.

Many of those cases are thought to be omicron, which is estimated to account for more than 90% of current COVID cases in the New York area, according to the CDC.

“The rise in infections is pretty dramatic,” said Gigi Gronvall, a senior scholar at the Johns Hopkins Bloomberg School of Public Health who has tracked COVID-19 testing efforts during the pandemic.

Testing can help ensure safety at gatherings, even if people do not have symptoms and were not exposed to the virus, according to the Centers for Disease Control and Prevention.

“Take a test before you gather,” the agency’s director, Dr. Rochelle Walensky, said this week as omicron led to spiking cases ahead of the holidays.