The co-owner of a New York City bar repeatedly defying coronavirus restrictions maintained his innocence one day after he was charged and released from police custody for allegedly running over a deputy with his car.

Danny Presti tried to drive away from his bar, Mac's Public House, as deputies were arresting him for serving patrons in violation of city and state closure orders, Sheriff Joseph Fucito said.

Deputies attempted to arrest Presti as he left the bar early Sunday, but Presti got into his car, struck a deputy and kept driving for about 100 yards as the deputy was left hanging onto the hood, Fucito said. 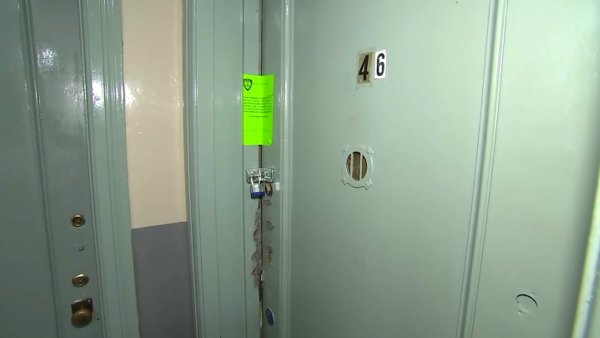 The deputy had two broken legs, but was out of the hospital, Fucito said Monday.

Presti, 34, was eventually stopped and apprehended, the sheriff said. Presti was arraigned Sunday afternoon in Staten Island's 122nd Precinct on 10 charges including third-degree assault, reckless driving, menacing and resisting arrest. He was released Sunday on his own recognizance.

Presti spoke publicly at a press conference outside Mac's Public House Monday morning where he was joined by bar co-owner Keith McAlarney and legal counsel. His lawyers, Louis Gelormino and Mark Fonte, claim the police account is an "outright lie," and that the injured officer only suffered an ankle injury.

At the news conference, the Presti supporters said the governor and mayor were trying to “crush the little man who dares to speak up” while trying to protect his small business amid the pandemic. They said that the team of sheriff’s deputies — normally involved in low-profile civil enforcement — swept in to arrest their client as if he were a dangerous criminal.

NBC New York obtained surveillance video from Presti's lawyers Monday afternoon that allegedly shows the bar manager running to his vehicle from two men the lawyers say were dressed in dark clothing who did not identify themselves. Presti gets into his vehicle and starts to drive away with one of the deputies riding on the hood of the vehicle. His lawyers argue the video shows Presti was trying to flee from people he did not know.

"I have nothing but respect for the NYPD and other law enforcement," Presti told reporters. "I think you'll find at the end of the investigation, you'll find that I've done nothing wrong."

Sources familiar with Sunday night's incident say cops did not make Presti perform a breathalyzer test at the precinct despite a request by the sheriff's office. The NYPD said there was paperwork to do first and by the time they finished, it was too late to see if Presti had alcohol in his system.

"We should always ask if people are being treated fairly and if there's equality in the way we enforce our laws," de Blasio said Monday. "In this case, I want to hear from the law enforcement leaders, the NYPD, the district attorney, et cetera, on the decision and why it was made and how it fits in with the overall rules of who gets released and who doesn't."

De Blasio added that Presti "should pay very, very serious consequences for what he did." Meanwhile, Gov. Andrew Cuomo called Presti a "coward" and blasted those who are still supporting him.

"How dare you?" Cuomo said at a coronavirus briefing. "What kind of signal are you sending? It’s repugnant to the values of any real New Yorker."

Lawyers and supporters of Presti countered by accusing authorities of staging a "political ambush."

A video from just before the arrest shows people drinking, with few masks and no social distancing, in the space next to the bar. Police say Mac’s, which had its liquor license suspended, supplied the alcohol and asked for donations in return.
Those who gathered there feel the city and state had no right to shut them down.

“Look what’s happening now, people can not go out and have a good time at the bar - it’s turning right now into a black market," one bargoer said.

The Staten Island bar was the site of protests last week after the sheriff's office arrested Presti on charges of violating restrictions aimed at halting the spread of the coronavirus and obstructing governmental administration, and the latest incident that left a deputy hospitalized didn't appear to deter protesters.

The bar's owners said business operations would be suspended for several days out of respect for the official investigation and a previously scheduled march for Monday evening would be postponed.

A woman who says she lives near the bar with a 4-month-old baby told NBC New York she disagrees with protesters and said she just wants the chaos to end.

The tavern is in an area designated by Gov. Cuomo as an orange zone because of spiking COVID-19 rates and was not supposed to be serving customers indoors. But the owners had declared the bar an “autonomous zone,” a nod to protesters who claimed control over a Seattle neighborhood in June.

"I am always concerned that we have to make sure consequences are clear. I respect that the law enforcement system has a way of determining who can get released and who doesn't," de Blasio added Monday. "What I care about the most here is that it be very clear there are serious serious charges and that this guy did something extremely dangerous and he needs to suffer the appropriate consequences for what he did."

Authorities said the bar was still serving patrons Saturday night even though it was ordered closed entirely after Presti's earlier arrest.

Deputies surveilling the pub saw that the front door to the bar was locked but customers were being directed to a building next door, Fucito said. From there, they were able to enter Mac's Public House through a back door and order food and beverages, he said.

Supporters lined up outside a Staten Island bar, upset that it had been shut down for repeatedly defying COVID-19 restrictions from the city and state. NBC New York's Phil Lipof reports.
Copyright NBC New York/Associated Press