New York Gov. Kathy Hochul declared the state's COVID numbers "status quo" on Wednesday as she reiterated her urgent message on vaccination as tens of thousands more kids and office workers get out of homes and back on their "jobs."

She also said she remains firmly committed to the state's vaccination mandate for healthcare workers despite a judge's temporary blocking of the imminent rule on Constitutional grounds around religious exemptions. Hochul said New York is fully prepared to appeal that decision and will supply state resources to any facilities that find themselves losing staff who won't show up to work due to the mandate.

"People need to start realizing that when you stand and up and say you want to be a public health official in any capacity you have to be healthy yourselves," Hochul said. "Yes, there will be some individuals who will try to defy this. There will be court decisions that we'll appeal -- we're going to continue appealing those and try to appeal on the merits. It's the smart thing to do. We have to continue the mandates."

"I'm not going to let this be a problem for the state of New York," she added, saying she won't allow patients to worry "that they could contract a virus from somebody who is supposed to protect their health."

About 100 million workers fall under President Biden's new vaccine mandate because they work for companies that employ more than 100 people. But that mandate goes a lot farther than the federal government has gone before. NBC10's Mitch Blacher talked to a legal expert about the requirement.

The latest back-and-forth stems from Hochul's order issued Aug. 28 that requires hospital and nursing home workers get at least a first shot by Sept. 27

In issuing the state injunction, Judge David Hurd in Utica gave New York until Sept. 22 to respond to the lawsuit, which was filed by 17 medical professionals, including doctors and nurses, earlier this week. If the state opposes the plaintiffs' request for a preliminary court order blocking the mandate, a Sept. 28 oral hearing will occur.

It most certainly appears that the state will forcefully oppose the plaintiffs' request. More on that front is expected to develop in the next two weeks before the hearing.

In their lawsuit, the 17 health professional plaintiffs disguised their identities with pseudonyms such as “Dr. A.,” “Nurse A.,” and “Physician Liaison X.” They said they wanted to proceed anonymously because they “run the risk of ostracization, threats of harm, immediate firing and other retaliatory consequences" if they did not.

They cited violations of the U.S. Constitution, along with the New York State Human Rights Law and New York City Human Rights Law, because the state Department of Health regulation requiring workers to get the vaccine provided no exemption for “sincere religious beliefs that compel the refusal of such vaccination.” 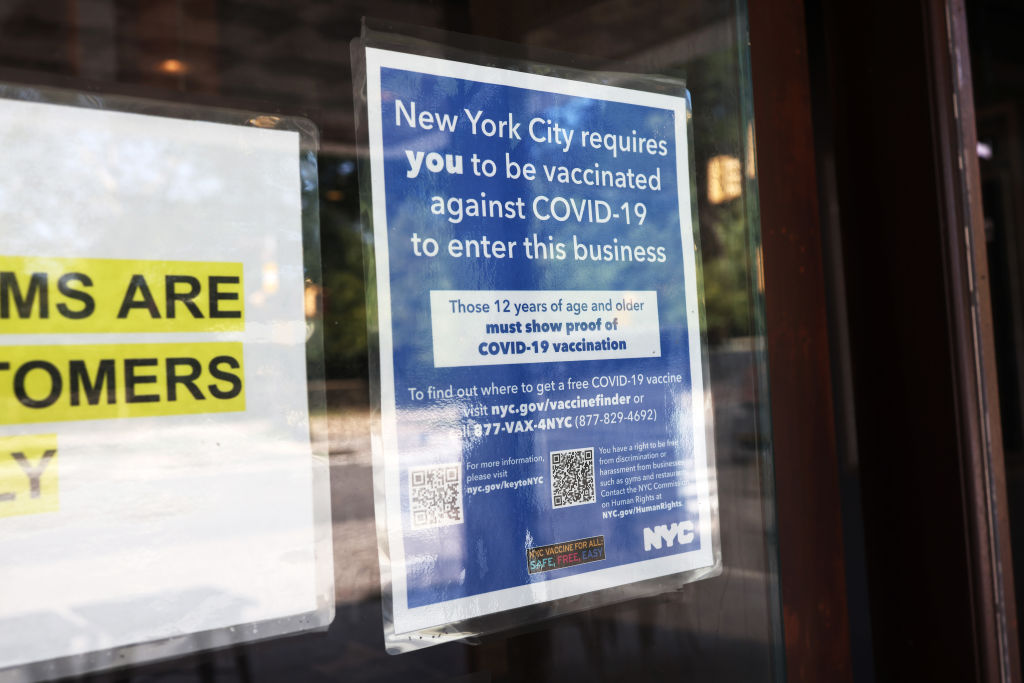 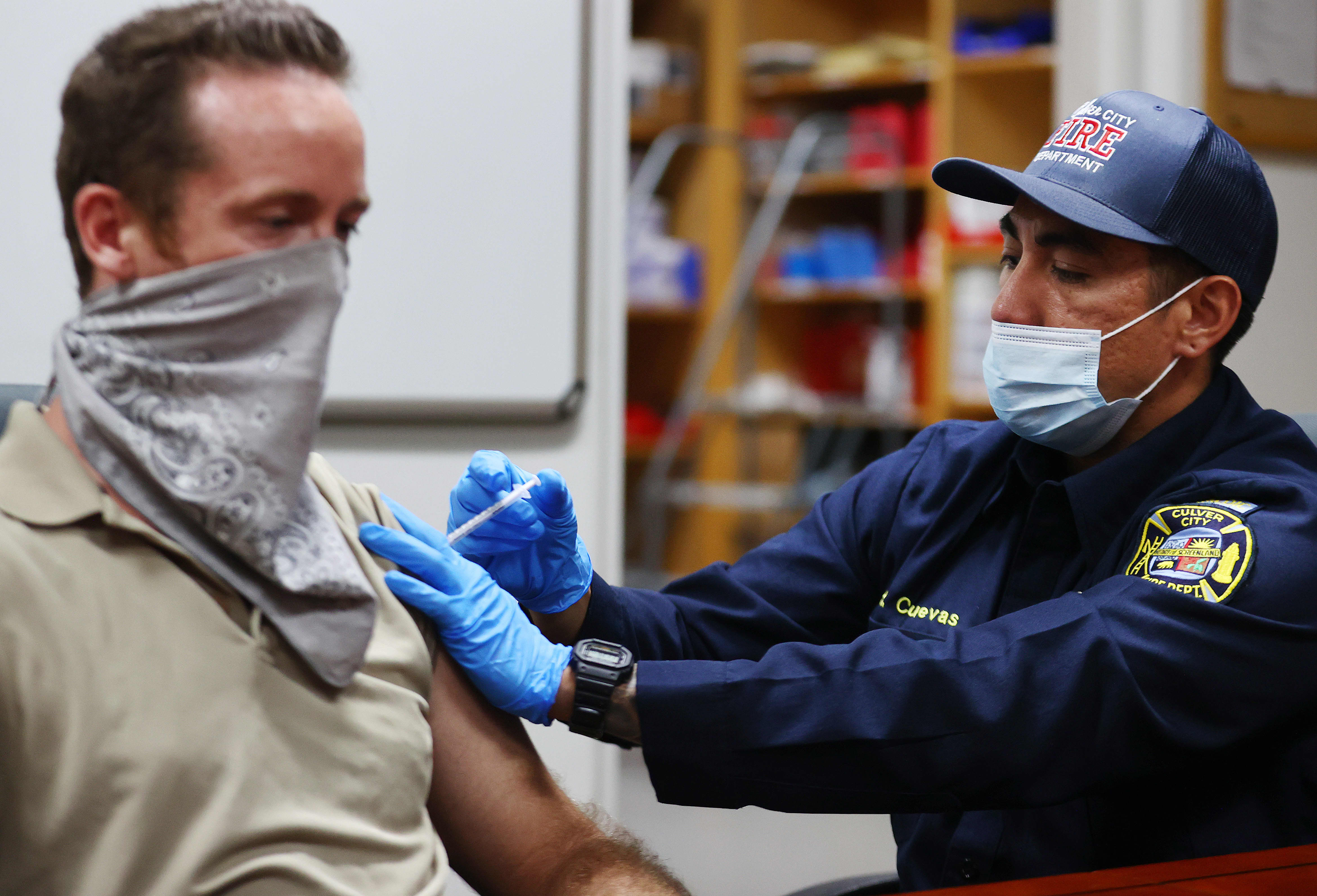 More Workers Are Facing Mandatory Covid Vaccination Or No Job

Court papers said all available COVID vaccines employ aborted fetus cell lines in their testing, development or production. But religious leaders have disagreed over the issue and the Vatican issued a statement last year saying the vaccines were “morally acceptable.”

The plaintiffs, all Christians, include practicing doctors, nurses, a nuclear medicine technologist, a cognitive rehabilitation therapist and a physician's liaison who all oppose as a matter of religious conviction any medical cooperation in abortion, the lawsuit said. It added that they are not “anti-vaxxers” who oppose all vaccines.

Some colleagues were disappointed by the ruling.

Dr. Joseph R. Sellers, president of the Medical Society of the State of New York, said in a statement that the nonprofit organization for physicians, residents and medical students was “greatly dismayed."

“We believe this step will result in a flurry of attempts to circumvent the well-reasoned vaccination requirement that was an important step towards reversing the recent surge attributable to the more easily spread delta variant,” he said. “No major religious denomination opposes vaccinations, and the Supreme Court has for over 100 years upheld vaccination requirements as a means to protect the public health.”

Dr. Anthony Fauci said on Tuesday that data is being studied to see if there will be recommendations for COVID booster shots in the future.

That Sept. 27 planned date for the healthcare worker mandate is the same day New York City education employees are required to do the same by mayoral mandate.

Of his mandate, Mayor Bill de Blasio said there would be "no delay in the city's implementation of this vaccine requirement."

De Blasio said he believes the city has the authority to mandate vaccinations for school staff because of the research and the data, especially around unvaccinated kids, whose COVID hospitalization rates soared this summer amid the delta threat.

Equally aware of that threat to unvaccinated children, especially those who aren't yet eligible for vaccination, Hochul issued new mask rules Wednesday requiring face coverings at all childcare and daycare centers in the state, regardless of vaccination status for those administering care.

Hochul said those new mask rules take effect immediately, indicating they apparently were not covered under the broader "healthcare" or "school" setting category where the CDC has not eased its mask recommendations just yet.

"With the delta variant on the rise, requiring masks at state-regulated child care, mental health, and substance abuse facilities is a key part of our broader strategy for slowing the spread of the virus, reopening our economy safely, and protecting vulnerable members of our population," Hochul said. "For children under 12 who are not yet eligible to be vaccinated, masks are the best line of defense against COVID-19 infection. This new mask requirement ensures that children in our child care facilities receive the same protection as children in our schools."

She also expressed ongoing concern about lower vaccination rates among eligible kids age 12 to 17 compared with their older counterparts. Now she is looking, as her predecessor did, to ply them with more incentive-based vaccine offerings.

On Wednesday, Hochul rolled out a new enticement on that front: The state will give 125 Governors Ball tickets to individuals who get their first vaccine doses at a #VaxtoSchool pop-up location. See more details on that program here.

Billie Eilish, Post Malone and A$AP, along with Megan Thee Stallion, will feature as some of the highlighted performing acts at the festival, which runs Sept. 24-26.

"We can do better, and I'm still keeping all the options on the table," Hochul said when asked Wednesday for the second time in two weeks about whether she might consider mandating vaccination for eligible school-age kids as the city of Los Angeles has done. "I'm watching the numbers to see if the number of children with infections starts increasing in the state of New York."

Hochul also gave an update on the state's booster shot plans Wednesday as New York readies for what the governor expects to be an onslaught of people seeking additional protection as soon as they can, possibly as early as this fall.

In anticipation of that crush, which Hochul said could be similar at least in part to the crush New York saw at the onset of the rollout, she directed the Department of Health to allow basic EMTs to give vaccines in an effort to expedite the process.

That adds more than 2,000 fully trained vaccinators back into the state's program. It also makes 50,000 basic EMTs eligible for training.

He urged those who haven't gotten a first dose to get in line now so they can avoid what he expects to be a huge surge in demand.