New York City is making all adults 18 and older eligible for a COVID booster; in New Jersey, the governor said 'that's a direction we are headed'

New York City's top doctor said Monday that all New Yorkers age 18 and older can get a COVID booster if they want one -- and he issued a commissioner's advisory reminding providers not to deny anyone who wants that added protection.

The FDA and CDC have yet to authorize boosters for all adults, though that could come as early as next week, but Dr. Dave Chokshi, commissioner of the NYC Department of Health and Mental Hygiene, says the city is making them all booster-eligible anyway. It comes ahead of what is expected to be a travel-packed Thanksgiving and Christmas season, with family and friends gathering in groups the size of which many haven't seen for the last two years amid the pandemic.

It also comes as New York City finds itself in the midst of a COVID case uptick before the busy holiday season has even gotten underway. According to the latest city numbers, the rolling weekly COVID case average is up 13% compared with the rolling average the prior four weeks. Deaths and hospitalizations remain down, a testament to the power of vaccination to prevent serious illness, officials say.

Across the state, the number of people testing positive each day for the virus has gone up 45% since Halloween. As of Monday, New York was averaging around 5,400 new cases per day over the past seven days.

Dr. Anthony Fauci described a similar trend nationally, too, pointing to the northeast and the midwest as the primary reasons accounting for the new influx in cases.

And the holidays present a peak vulnerability time as New York City, the one-time epicenter of the global pandemic looks to continue its accelerated pace of recovery.

"I know that booster doses can provide one more layer of reassurance, allowing us to breathe a bit easier for ourselves or for our loved ones, particularly as we gather and travel around the holidays," Chokshi said. "So let's use every means at our disposal to make this a safe and healthy winter season."

The federal government approved COVID booster shots last month for millions of Americans, including the mixing and matching of vaccine brands. Health officials say the latter is safe -- and boosters are recommended for most of the population.

Chokshi said his commissioner's advisory covers all three vaccine types as well. Asked whether his latest guidance is consistent with federal and state recommendations, the health commissioner said "yes." He cited one of the key qualifiers -- risk of individual exposure -- as being among the reasons.

Exposure risk is a highly personal assessment, Chokshi explained, and while the city wants to prioritize people it knows will most benefit from a booster, it doesn't want to turn anyone away either.

Dr. Mitchell Katz, president and CEO of NYC Health + Hospitals, expressed support for the univeral booster eligibility. He agreed with Chokshi that New York City's density is an automatic heightened exposure risk -- and the expected busy travel season ahead for the next month and a half only compounds that risk.

Later Monday, Gov. Kathy Hochul issued a statement affirming the importance of booster doses, especially at this time of year. She did not specifically reference Chokshi's advisory but did say "we must continue to do everything we can to keep New Yorkers safe" and pointed to recent comments by Fauci.

"Dr. Fauci recently noted that making the booster shot available to all is 'absolutely essential' to fighting this deadly virus - especially as people start to congregate indoors for holiday gatherings," Hochul's statement said. 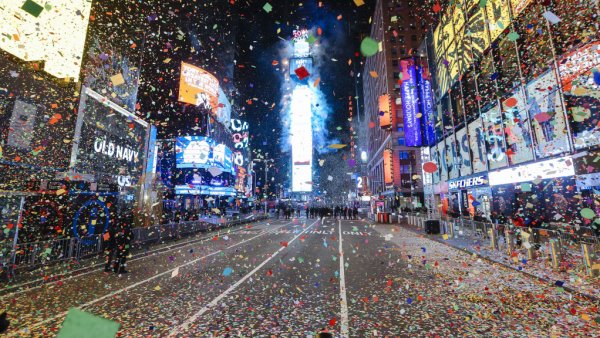 "I am strongly encouraging all New Yorkers who live or work in a high-risk setting to get the booster," the Democrat added. "I received the booster, and believe no one who feels they are at risk should be turned away from getting a COVID-19 booster shot. If you feel at risk, please get the booster."

According to officials, there are 6.6 million people aged 18 and up in New York City. Only about 630,000 have received boosters so far. That's about 9.5% of the newly eligible population.

Chokshi, who has taken care of patients as a primary care physician at Bellevue Hospital since 2014 and battled COVID himself earlier this year, recently wrote an op-ed on COVID boosters. Read it below and learn more about boosters here.

New Jerseyans can expect to join the growing number of states to widely expand booster eligibility to all adults over 18.

Naturally, after the earlier announcement from New York City, New Jersey Gov. Phil Murphy on Monday faced questions about his state's path in booster distribution on the precipice of the holiday season.

"There's not much, I'll speak for myself, that's preventing us from just saying 'you know what, if you're six months out or two months out in the J&J case and you're 18 and up, go get 'em,'" Murphy said.

"You've probably read between the lines, that's kind of what I'm saying today. But we wanna make sure we get this right. Obviously want to make sure the health and medical experts bless that. You see what California, the direction they're headed, Colorado, New York City, you can assume that's a direction we are headed," he added.

The governor's message comes as the Garden State has experienced the biggest weekly uptick in cases concerning multisystem inflammatory syndrome in children (MIS-C) in quite some time, according to state officials.

Commissioner of Health Judith Persichilli revealed there are five new reports of MIS-C since Gov. Phil Murphy's previous press conference held last week. According to Persichilli there are 141 cumulative cases in the state. However, the silver lining is that "none of the children are currently hospitalized."

As the holiday season is fast approaching, it is important to note that last year, there was an uptick in MIS-C in New Jersey as coronavirus infections dropped significantly among other demographics across the country following the winter holidays.