The American Academy of Pediatrics said in updated guidance Monday that everyone older than 2 should wear masks in schools this fall, vaccinated or not

Everyone older than age 2 should wear masks, regardless of vaccination status, when schools reopen in the fall, according to updated guidance from the American Academy of Pediatrics released Monday.

“There are many children and others who cannot be vaccinated,” said Sara Bode, MD, FAAP, chair-person elect of the AAP Council on School Health Executive Committee. “This is why it’s important to use every tool in our toolkit to safeguard children from COVID-19. Universal masking is one of those tools and has been proven effective in protecting people against other respiratory diseases, as well.

"It’s also the most effective strategy to create consistent messages and expectations among students without the added burden of needing to monitor everyone’s vaccination status," Bode added.

The updated guidance from the leading pediatric professional group comes as the rapid spread of the COVID-19 delta variant in under-vaccinated neighborhoods threatens to undercut the nation's -- and New York City's -- pandemic progress.

Calls have grown in the last few weeks for elected officials to reinstate indoor mask mandates to shield the millions of Americans who haven't yet been immunized.

Asked about the masks in schools issue as recently as Friday, New York City Mayor Bill de Blasio said the expectation at this point was for the mandate to remain in public schools throughout the city. The CDC still recommends the same, though de Blasio says that may very well change by September. If it does, he'll reevaluate -- the mayor reiterated the same approach on both counts when asked about it Monday.

Beyond the classroom, de Blasio has hedged when asked whether mask rules should be more fully reinstated, including for vaccinated adults. On Sunday, he said there's no plan to do so "at this point," but stresses city officials are closely monitoring the situation and are prepared to pivot viral strategy as needed.

On Monday, the mayor said he does not plan to reinstate a citywide mask mandate even as COVID-19 cases increase, opting instead to focus on vaccinating more residents. De Blasio, like others, says the latest case increases are by and large among non-immunized people. He also pointed to sustained declines in new hospitalization and death rates as a testament to the power of vaccination to curtail worse outcomes associated with the respiratory disease that first emerged in Wuhan in 2019.

His health commissioner, Dr. Dave Chokshi, echoed his statements Monday, saying, "It is true that there is more risk for any individual person but that risk is highest for people who remain unvaccinated."

Chokshi said "it's actually a more dangerous time to be unvaccinated" now than it was a few months ago because of delta's heightened transmissibility. 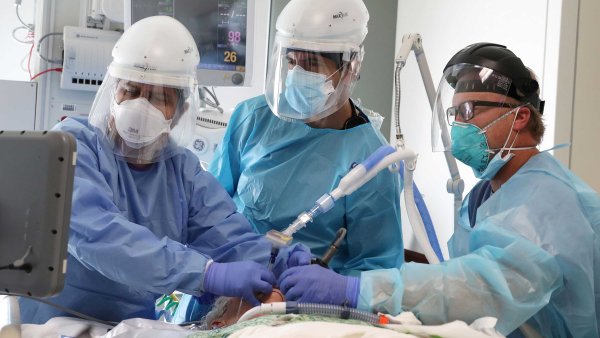 Covid Deaths on the Rise Again in the U.S. After Weeks of Decline, CDC Says

Murthy called easing mask guidelines "premature" and "harmful' in the face of the delta variant and urged everyone to wear masks regardless of vaccination status.

While U.S. case numbers and hospitalizations are still far below levels from the worst of the pandemic early this year, Murthy said the worsening situation shows the need to convince more people to get inoculations.

“It is our fastest, most effective way out of this pandemic,” he said.

About 186 million Americans have received at least one shot to date, but another 90 million eligible Americans haven't. Officials are trying to overcome hesitancy or outright refusal among some — particularly conservative, rural white people — to get vaccinated, but it's unclear how to do that successfully. So, as an interim stopgap, some places have reverted to health precautions that had been cast aside.

In a White House briefing on Thursday, U.S. Surgeon General Vivek Murthy shared his new advisory on the dangers of health misinformation during the COVID-19 pandemic.