Two key Albany lawmakers say the New York State legislature should move swiftly to address dysfunction in the NYC Family Courts that has prolonged family suffering because of outdated technology and massive backlogs. Thousands of families have struggled to get help visiting their children and collecting child support.

"This report highlights a gut-wrenching problem in the State of New York and we are going to do everything we can to fix that problem," said Charles Lavine, Chair of the State Assembly Judiciary Committee. "It's time for some more judges for the Family Court. It certainly is."

The call for the New York State Legislature to exercise their unique power to create more Family Court Judgeships was echoed Friday by Senator Brad Hoylman, Chair of the State Senate's Judiciary Committee.

"This is something the legislature needs to look at this session," Senator Hoylman said. "Currently, families are suffering and don't have time to wait any longer."

The response comes one day after the News 4 I-Team exposed widespread stress and heartache for families attempting to navigate the system.

When COVID-19 hit, the New York City Family Court came to a screeching halt for thousands of vulnerable families with children, revealing "deep inequities" and technical shortcomings that predated the pandemic, according to a new report by the NYC Bar Association and The Fund for Modern Courts. An advance copy of the report was obtained by the News 4 I-Team.

It concludes that during the pandemic, the vast majority of litigants "had virtually no access" to the court. Citing historic underfunding, the report concludes "Family Court was ill-equipped to respond quickly, consistently, fairly and comprehensively to the needs of all litigants." It also suggests the structure of the State's court system dooms the Family Court and its mostly poor, black and brown, lawyer-less litigants to chronic underfunding and a second rate system.

Long Island Plane, Helicopter Pilots Blinded By Lasers More Frequently Than Ever Before 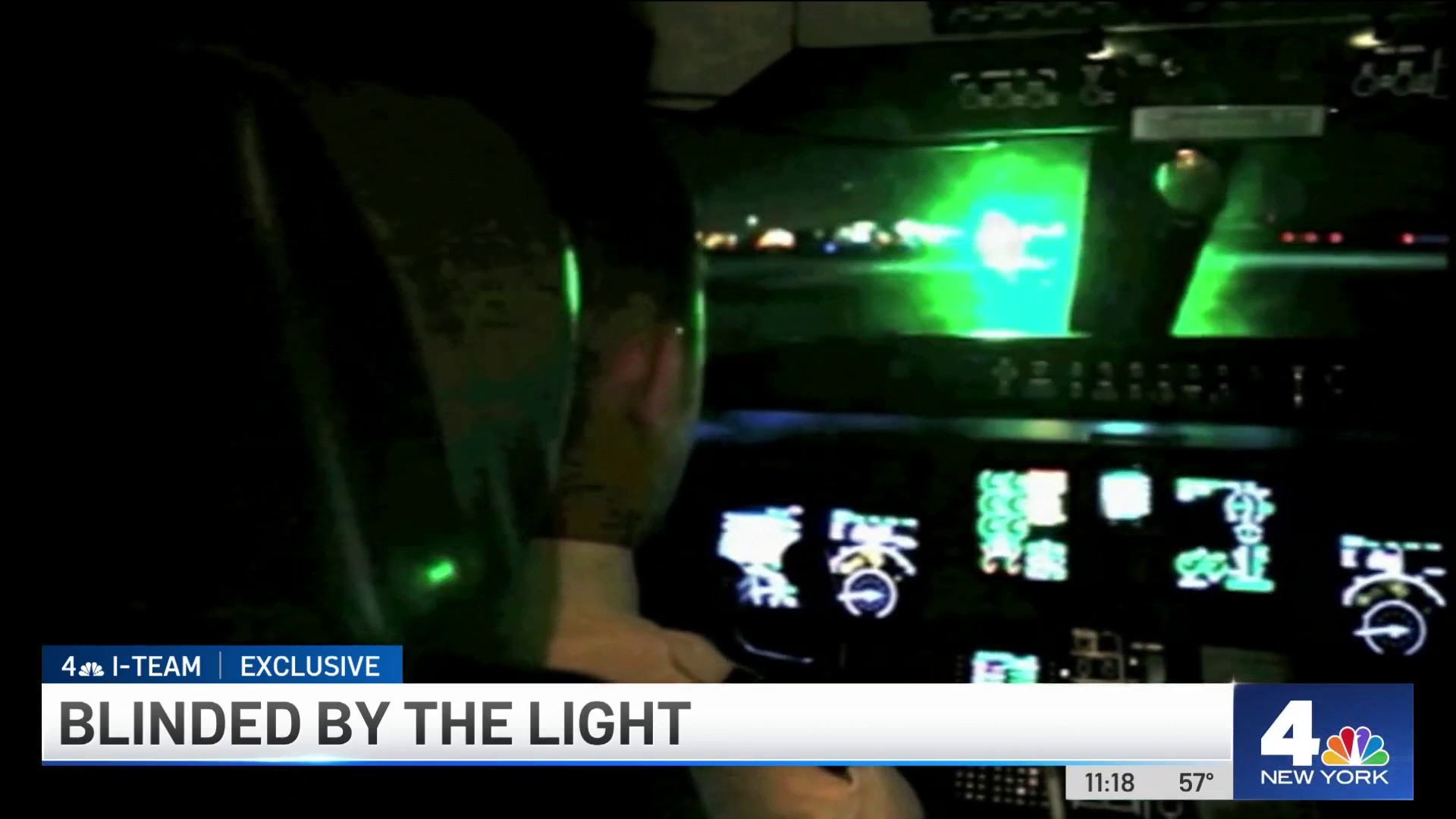 I-Team Exclusive: Blinded by the Light

"There were not enough judges," said Bill Silverman, a partner at the law firm Proskauer Rose who co-authored the report. "Pre-Covid, there were about 56 judges for over 200 thousand filings per year. There was a lack of technology. There is no electronic filing in Family Court. So when Covid struck, the Family Court had more difficulty functioning than other courts."

Now, almost two years later, many families are still facing staggering waits for relief, with their next court dates scheduled more than a year out.   According to I-Team discussions with litigants, attorneys and advocates who work in the Court, the failure to function left some parents without access to their children, and others unable to collect child support.

"It just makes you sad, having to sit down and tell your child we just can't afford this right now," said Cieanne Everett of Brooklyn. Everett initiated a case to collect child support for her 9-year-old son in December 2018, but she says the pandemic paralyzed an already lethargic Family Court process.

"You're literally at their mercy, sitting and waiting for them to decide when and how you'll be seen and heard," she said.

In Aug. 2021, Everett was unable to log onto a virtual court hearing and a magistrate dismissed her case. As a result, her child support payments of $146 a week stopped arriving. Everett hoped to get the payments reinstated when she finally secured a new hearing in December but when she logged in on Dec. 2, 2021, Everett says a court employee told her to doublecheck the date. Specifically, the year.

"He goes: Ma'am, what year is your court date?" Everett said.

It turns out Everett had the wrong year. Her next hearing is not until December of 2022.

"I am literally pissed," Everett says, describing her shock at the delay. "I said so you're telling me that I don't see you again for more than a year? And he goes 'Yup that's how backlogged we are' and hung up the phone. I was shaking."

According to the report, when Covid hit,  the Family Court chose only to deal with cases they deemed "essential." Examples included serious allegations of child abuse that could result in a child being removed from home, Juvenile delinquency cases in which a young person could face jail, and requests for orders of protection.

Many cases the court considered non-essential were put on hold for a year. Examples included custody, visitation and child support cases.

"It was an emergency, the fact that I needed to go food shopping," Everett said, adding she remembers the look on her son's face when she told him he had to withdraw from his after school sports activities because she could not afford them.

Adoption cases were also on the Court's non-essential list, which means children are waiting significantly longer for their family situations to be finalized. One of those children is 4-year-old Kamryn Porter in Queens.

The Family Court released Kamryn to be adopted by Marcia Myles last March.  But Myles says she was told it won't be official until at least June, the process taking 15 months instead of the usual 3 months.

"It's highly upsetting," Myles told the I-Team.  "It's very emotional for me. How could stability not be essential for a kid?"

As the family waits for closure, Kamryn has been practicing tracing and spelling her new last name. Myles says Kamryn is upset because she doesn't understand why she's not allowed to use it in preschool yet.

Until it's official, there are many decisions her adoptive parents are not authorized to make on their own. For instance, they're not allowed to bring Kamryn to visit family in New Jersey nor enroll her in school.

"It's just a lot for her not to be ours already," Myles said.

In a statement, State Office of Court Administration spokesman Lucian Chalfen said "there is no question that of all of the courts, the NYC Family Court, which has crushing caseloads and so many litigants who are not represented by counsel, has struggled the most during the pandemic. So this report should be read in the context of that reality. Having said that, many of the report's recommendations have merit and we will work with the Bar to implement them."

The report recommends the Family Court adopt an e-filing system and build a user-friendly website for families.

"We also need to move resources from other courts to the Family Court and we need more judges," Silverman says.

Only the State Legislature can create new Family Court Judgeships and the last time that happened was in 2014. In the meantime, the Family Court is forced to borrow judges from other courts. The assignments are temporary. Judges and hearing officers transfer in and out.

Even with the court in its current state of crisis, the I-Team has learned six judges are about to be transferred out, according to a January memo from the Office of Court Administration obtained by the I-Team. The move will result in the transfer of approximately 4,500 cases to incoming referees and magistrates.

The Office of Court Administration tells the I-Team they plan to hire 12 Referees and a number of Family Support Magistrates who will better serve litigants, as they are trained in Family Court matters, unlike the Civil Court Judges. OCA's spokesman added "Additionally, we have 3 Supreme Court Justices with Family Court dockets."

But critics are still concerned that turnover of thousands of cases will only cause further delays and confusion.

"Why do we have a system where we need to transfer judges from one court to the other, lend them to one court and then take them away, only to delay all of those cases?" Silverman asked. "It makes no sense whatsoever and that is a function of our structure."

Silverman is advocating a Constitutional amendment to simplify the structure of the State's Court System. He argues that with eleven separate trial courts in New York State, it's difficult to move resources where they're really needed, locking in systemic inequities that impact vulnerable clients of color.

Albany's respective judiciary chairs Lavine and Hoylman tell the I-Team they agree the "Balkanized" system needs to be restructured and simplified.

"It is not going to be an easy piece of business," Lavine said. "The people of New York should know some of our courts actually predate the revolutionary war. This is a court system that's been in effect for two and a half centuries and it certainly does need to be modernized because we have too many separate and distinct courts."

Hoylman says the I-Team and Bar Association reports are more proof that "our court system is least fair to racial minorities." Some parents tell the I-Team the Family Court felt like a second class system.

"It felt like a dead end.  Every time you call, no answer," said Eno, a Nigerian Uber driver and father of seven who asked the I-Team not to use his full name.

Eno says he was almost forced into financial ruin by a Family Court error during the pandemic. His credit rating tanked and his driver's license was almost suspended when he was unable to reach the Court to dispute an erroneous 15 thousand dollar child support order that was eventually reversed with the help of an advocate from the non-profit legal assistance group LIFT (Legal Information for Families Today).

"I was really into a depression," Eno said.  "As a black man, they look at you like you are not responsible to take care of your own children."

As for the timeline for any new judgeships, Asssemblyman Lavine said he could not say whether funding would materialize in the FY 2023 budget, due on April 1. He said preliminary discussions had started and that the matter would need to be discussed with Governor Hochul, OCA and Legislative leaders, who have not weighed in yet.

While Hoylman insists action is needed now to address the needs of families, he added "There are a number of steps that can be taken that don't cost hundreds of millions of dollars."

Examples, he says, include a uniform system of filing, processing and tracking cases and regular publishing of statistics that show court productivity, "so that these facts are apparent to policymakers like me."