“Paramour”—the first original production for Broadway from Montreal’s prominent Cirque du Soleil—is a hybrid musical combining a conspicuously familiar plot about an actress caught in a love triangle with a series of genuinely thrilling athletic sequences.

The era is Hollywood’s Golden Age. Broadway vet Jeremy Kushnier plays A.J. Golden, an egomaniacal director on the lookout for a new leading lady. He finds her in Indigo James (Ruby Lewis), a flame-tressed nightclub singer. Ryan Vona is Joey Green, Indigo’s composer, besotted with unrequited love for her.

Of all the gin joints, in all the towns, in all the world, A.J. walks into Indigo’s, and … things aren’t going to end well for somebody. The $25 million “Paramour” goes heavy on the company’s signature stunt sequences to our relief, because there isn’t much to be extracted from the often eye-glazing book and score.

The story follows the ill-fated trio as the director makes his film, which both shares our show’s title and creates a reason for the production numbers, which will showcase lead actress Lewis in scenes inspired by classic films: “Casablanca,” “King Kong,” “Cleopatra” and so on. 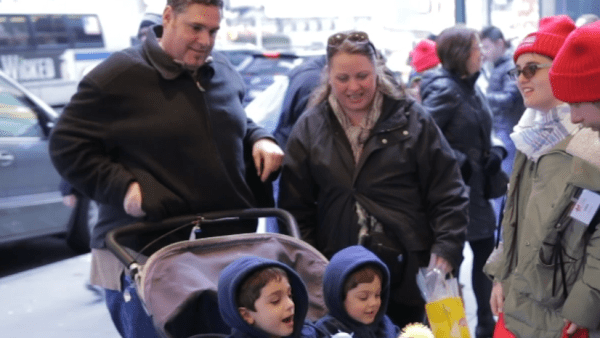 Clocking in at a tourist-friendly 2 hours, “Paramour” earns props for the ways it employs aerialists and acrobats as doppelgängers for the leads. Thanks to clever costuming conceits, we almost believe we’re watching the trio in some blur of elastic trickery, when it may be circus performers wearing similar clothes.

Identical twin trapeze artists Andrew and Kevin Atherton spin in the air and high above the orchestra section in an elegant routine that draws gasps near the end of the first act. It’s endearing and exciting, because it appears dangerous.

A second-act chase sequence is set up by a dizzying video flyover of old-time New York City. Acrobats, ostensibly in pursuit of Joey, bounce around on concealed trampolines, making it appear they’re hopping from rooftop to rooftop.

The tango-esque “Love Triangle” plays out between the three central characters as closely attired counterparts work behind them, “exchanging” starlet “Indigo” between “A.J.,” on a trapeze, and “Joey,” on the ground. It’s all physical prowess and pleasing showmanship, though the lyrics are rough: “All three hearts are in a tangle / When they’re caught up in a … love triangle.”

In between, there are more intimate, signature Cirque moments. In a dream sequence, A.J.’s revenge fantasies are acted out by green zombies. The cast includes aerial strap artists, Chinese pole climbers and Russian beam jumpers. Some utterly wondrous stuff transpires with a see-saw.

Kushnier, whose credits include “Footloose” and “Jersey Boys,” makes the most of his cliché-ridden role, exuding confidence and hubris as needed. Lewis (“TV’s “Medium”) has a beautiful voice and gamely follows the worn path laid out ahead. Vona has a twinkle in his eye and a winning manner of self-deprecation.

The cavernous Lyric Theatre, with its liberal approach to amenities—servers will bring cocktails or bags of popcorn to your seat—seems the ideal venue for this mass-appeal effort. With the focus-grouped exploits on stage and off, “Paramour” could well be the love-child of its previous occupants, “Spider-Man” and the far more likable “On the Town.”