"Curb Your Enthusiasm" followers paying north of $300 a pop to see Larry David's Broadway debut will get what they're expecting with the absurd and erratic "Fish in the Dark,” which has just opened at the Cort Theatre, bringing with it record-breaking ticket sales.

Translation: It’s a pret-tay, pret-tay good time for some, but too much of nothing for others. What plays well on the small screen occasionally generates honest laughs on stage, though “Fish” becomes ponderous and ultimately feels like a sitcom episode tenuously stretched over two-plus hours.

Here, David plays Norman Drexel, who along with his too-slick brother (Ben Shenkman, of TV’s “Royal Pains”) is trying to accept the death of his father. Both a first-time Broadway actor and writer, the “Seinfeld” co-creator and HBO star came to the plot after attending the real-life funeral of a friend’s dad.

Directed by Anna D. Shapiro, who most recently led the cast of “This Is Our Youth,” the large ensemble also includes Rita Wilson, Rosie Perez and Jerry Adler. 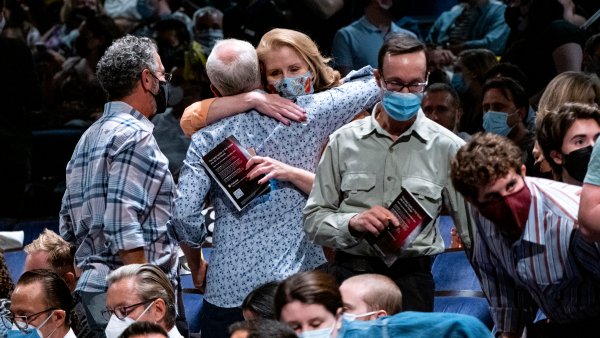 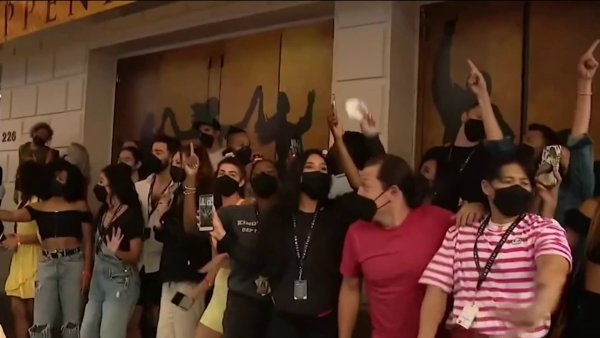 Broadway Celebrates as Curtains Rise at Some of Its Biggest Shows

The scene sets up the comedy’s central quandary: the brothers have to figure out who’s going to take care of Gloria, their widowed mother (“Well” and “Follies” star Jayne Houdyshell). Dad was unclear about his wishes, and neither son wants the burden. Can you guess who ends up taking in mom?

The humor is vintage David, and you either find it appealing or you don’t; I thought a lot of the writing was lazy or boorish.

On learning that his bedridden father has inappropriately touched a buxom visitor (Jenn Lyon, evoking Madeline Kahn in the best of ways), Norman breaks into just the riff you’d expect: “What kind of pressure was applied?” and so forth. When he discusses the fairer sex with brother Arthur, the repartee has the rhythm of well-worn ethnic shtick: “Have you ever been with two women?” Arthur asks. Comes David’s reply: “I once sat between two women in coach.”

Like David’s semi-fictional “Curb” character, Norman says and does things few would ever say—at a gathering after the funeral, Norman accuses his 14-year-old niece (Rachel Resheff, below) of plagiarizing her eulogy, reducing the girl to tears—but is down deep a guy trying to do right by the people in his life. That sometimes doesn’t sit well with wife Brenda (Wilson, giving a generally stiff performance), who threatens to up-and-leave if Norman allows mom to move in.

This “Fish” has a tendency to meander. More than once I felt as if the comedy was hitting a brick wall, only to be jarred out of my stupor by a set-up that could only come from David’s sharp, Sheepshead Bay-cultivated mind. Those moments are too rare.

Among the fresher things about David’s comedy is the endearing performance by newcomer Jake Cannavale, teen offspring of Broadway vet Bobby (and grandson of “Dog Day Afternoon” director Sidney Lumet), as the son of longtime Drexel-family maid Fabiana (Rosie Perez, playing a familiar version of Rosie Perez). The young man makes the most of his big moment in the second act, holding his own against seasoned pro Houdyshell in a scene that is classic squeam-inducing Larry David

Scene changes are broken up by a death certificate imposed on a screen, in lieu of a curtain. The type on the certificate is animated, dancing around and filling in details of Sidney's life. It doesn't serve much purpose to the story, but is probably keeping a few graphic designers in egg salad.

The title—minor spoiler alert—refers to a story family matriarch Gloria tells about a meal she was served by Wilson’s Brenda a dozen years earlier: the lights were dim, and husband Sidney nearly choked on a fish bone. Gloria's never forgiven her daughter-in-law for serving … you get it.

"Curb" devotees are rewarded with the occasional nod to the series, which ran eight seasons and has admirers clamoring for still more—listen closely for the aside Norman makes to his aunt’s husband about “those big balls,” as he’s exiting the hospital room.

Hardcore Larry David fans will get a kick out of seeing the comic live on stage. Most theatergoers, though, will be better off throwing this one back in the river.